Learn about the separation and release agreements that protect your business, and impact your career. 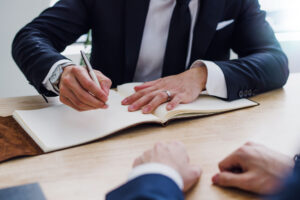 A separation agreement is a contract between a company and a departing worker, usually an employee (though sometimes an independent contractor).

Typically, the company offers some type of payment (often called a severance) in exchange for a waiver and release of claims. The agreement may offer other beneficial terms to the employee, such as continued healthcare benefits, a neutral reference, and services to help find a new job. The employer may receive promises in addition to the release of claims, such as the employee’s agreement not to solicit clients or other employees.

In short, separation agreements benefit the employer by:

In turn, separation agreements benefit the employee by:

When to Negotiate a Separation Agreement

Employers frequently use the promise of a severance payment to recruit top talent and incentivize performance. So, even though it may seem counterintuitive, the best time to negotiate a separation agreement is often when you are agreeing to join a company rather than when you decide, or are forced, to leave. (Indeed, an important part of any contract negotiation is determining how the parties will act when they part ways.)

Understanding Your Rights Before Signing

Both employers and employees should understand their existing rights and obligations before signing a separation agreement. An existing agreement or law may already require an employer to provide certain payments, paid leave, continued insurance coverage, or other benefits. Similarly, an employee may have already signed a non-compete, non-solicit, non-disparagement, non-disclosure, or other restriction as part of a stand-alone agreement or offer letter.

Pre-existing agreements can take many forms, including:

The rights under these agreements may depend on the circumstances, like why the employee is leaving. For example, an employee may be entitled to severance if they are terminated “without cause” but not if they leave voluntarily or get fired “with cause.”

State law may also mandate when final paychecks must be issued, how an employer can handle “accrued but unused” paid time off (PTO), and whether an employer can withhold non-discretionary bonuses or commissions.

Know your rights before you prepare or sign a separation agreement, so you can focus on the new rights and obligations being proposed.

Separation agreements typically provide for payments beyond what the employer already owes the departing worker. That is called a “severance” payment, and can be issued in one lump sum or over the course of weeks or months.

There is no magic formula that every employer uses to calculate severance payments. Many employers base the severance offer on the length of the employee’s tenure with the company – such as a week or a month of severance for every year of service.

The amount of severance may also be tied to how the employer values the employee’s release. An employee with a viable claim and an expressed willingness to pursue that claim in arbitration or litigation may have greater leverage to negotiate a higher severance payment. Both parties often turn to the advice of an employment attorney in assessing potential claims, risks, and rewards – including the cost of pursuing or defending such claims, and the disruption to their respective business and career.

In addition to a severance payment, separation agreements may also provide for a wide variety of other cash and non-cash benefits, including:

Employers typically offer separation agreements in part (if not exclusively) to receive a release and waiver of claims from the departing worker. As such, it is essential that an employer have appropriate language to ensure that the release is enforceable.

Employees, in turn, need to understand their rights and obligations under the release, as well as the scope of the release, which is typically broad.

What is being released?

The release typically covers claims arising out of anything that occurred on or before the signing of the separation agreement. The released claims are usually defined broadly, citing every type of claim or liability arising from any conduct that occurred up to the moment of signing.

Some separation agreements define the released claims as arising out of conduct that happened either at or outside the workplace, whether they relate to employment or not. The release usually covers claims that are “known or unknown” – meaning even claims that are not apparent until after the agreement is executed (so long as the conduct underlying the claim occurred before execution).

The release may also address pending charges, specifying the court or other tribunal and listing the case number or other identifying information. The separation agreement may require the employee to withdraw or dismiss the charge “with prejudice” – that is, without the right to file it again later.

Certain rights cannot be waived, or must be waived with the appropriate language, limits, or procedure. Federal, state, and local law may prohibit any waiver that interferes with their mission. Human rights agencies, such as the federal Equal Employment Opportunity Commission (EEOC), protect an employee’s right to charge an employer with discrimination, retaliation or other unlawful conduct. Releases may (and should) carve out such rights. However, employers may also make the employee waive any ability to recover money resulting from such charges.

Other rights must be waived only pursuant to certain required language set forth in federal, state, or local statutes. For example, federal law prohibits an employee from waiving any right or claim under the Older Workers Benefit Protection Act (OWBPA), which is part of the Age Discrimination in Employment Act (ADEA), “unless the waiver is knowing and voluntary.” A knowing and voluntary waiver under the OWBPA must, in addition to other requirements, specifically refer to rights or claims arising under the OWBPA, not waive rights or claims that arise after the release execution date, advise employees of their right to consult with an attorney, give the employee at least 21 days to consider the agreement, and allow a period of at least 7 days to revoke the agreement. Waivers connected with “an exit incentive or other employment termination program” must also provide at least 45 days to consider the agreement and information regarding the other employees covered by the program (such as job titles, ages, and eligibility factors for the program). The required details are contained in 29 U.S.C. § 626(f)(1).

Who is getting released, and who is doing the releasing?

The people or entities who are being protected from suit by the release (typically called the “released parties”) are often broadly defined to include not only the employer, but also its affiliates and predecessors, and its owners, directors, officers, employees, and agents.

The people or entities giving the release (the “releasing parties”) are also often defined broadly to include not only the worker but also the worker’s heirs, representatives, and agents.

Employers frequently resist mutual releases. An employer typically promises to pay severance in exchange for a release, and may take the position that a lack of mutual payment should mean a lack of mutual release. In addition, employers are often concerned about waiving their right to pursue an employee for improper conduct that the employer uncovers after the employee departs. One possible solution is to agree to a mutual release that excludes claims that were known to the employer or that involve intentional or grossly negligent behavior by the employee. That would still allow an employer to pursue, for example, theft by the departed employee that is uncovered during a later audit or other review.

The release waives claims for conduct that occurs on or before the date the agreement is signed. As a result, an employee often signs the separation agreement and release after the date that the employee stops working, often called the “termination date.”

Sometimes, though, employers want to finalize the separation agreement before the termination date. In that case, the separation agreement may include an obligation to sign a second release after the termination date. That second release would cover any claims relating to conduct that occurred during that interim period between the first and second agreement signings.

Some employers may want to restrict how departing workers can behave in the future, by using “restrictive covenants” – such as non-compete, non-solicitation, non-disclosure, and non-disparagement clauses. These are critical limits on how the employer may behave in the months or years after leaving employment:

Every state has its own test for whether restrictive covenants, especially non-competes, are enforceable. Certain state legislatures are implementing laws that prohibit certain non-compete restrictions on low wage workers. (Read about What Virginia Employers Need to Know About the New Non-Compete Law.)

Employers may also seek to include provisions in the separation agreement that afford additional protection relating to restrictive covenants, including language that:

Separation agreements may also address what happens after departure, such as employees returning company property, documents, keys, and devices. The agreement may also address, or remind the parties of their obligations regarding, the ownership and use of any work product or intellectual property created by employees during their tenure.

The separation agreement may, subject to law, include a confidentiality provision that restricts the parties from disclosing its terms, or even its existence, except to a limited group of people (such as attorneys, financial advisors, close family members) or as legally required.

Companies should try for a smooth transition, and may ask the employee for help with transition and training of any replacement staff. Employers may also try to secure cooperation from a departing worker regarding any subsequent litigation relating to that worker’s tenure – including participation in investigations, depositions, trial, or other proceedings.

Employees often seek to negotiate reasonable time limits on such assistance, reimbursement of out-of-pocket costs relating to such aid, and perhaps additional pay, as appropriate.

Like any other contract, a separation agreement should address what happens if a party breaches its obligation. Typical issues to address include:

A separation agreement, when properly drafted and negotiated, can provide critical protection and benefits for both employers and departing employees. Companies can minimize the threat of litigation, guard against the loss of clients or staff, and protect good-will and reputation. Departing workers, including employees and independent contractors, may obtain payments and continued insurance that will help with any period of unemployment, and other intangible benefits, such control over how the departure is perceived.