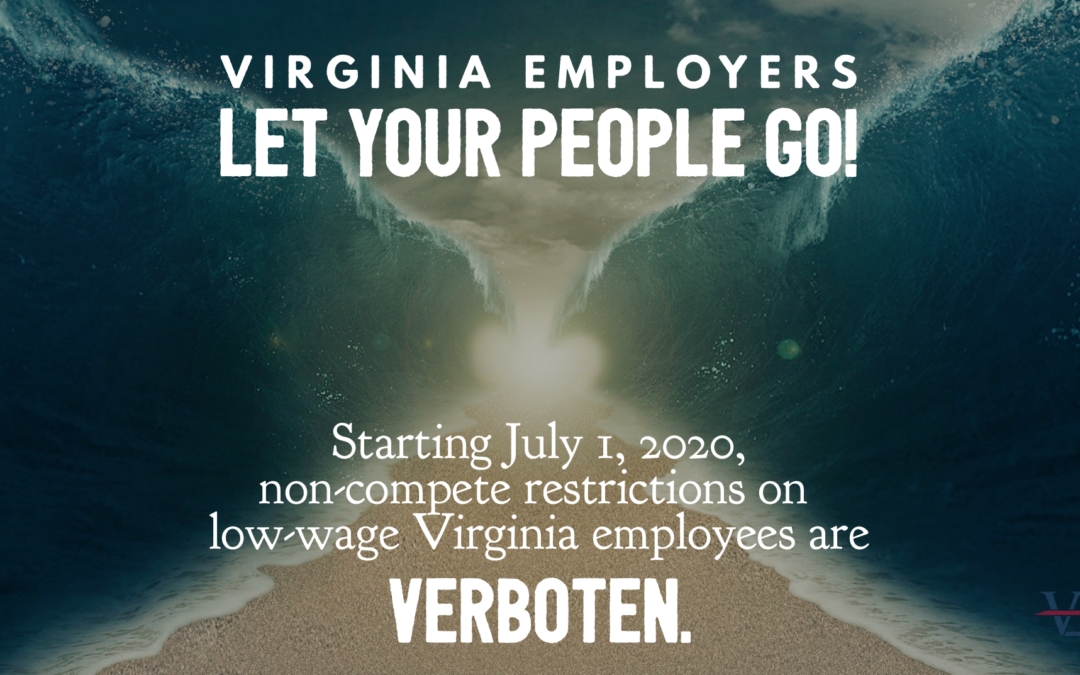 A new law in Virginia prohibits employers from placing non-compete restrictions on their low-wage employees. The law goes into effect on July 1, 2020, and applies to non-compete provisions entered into on or after that date.

Non-compete clauses typically limit where, how, or for whom employees can work after they leave their employers.

Non-competes, by definition, limit competition. So, they are usually “disfavored” by courts.

While every state has its own test for whether a non-compete is enforceable, it often come down to some form of the same question: Is the restriction reasonable?

Courts may approach that question from different angles:

More and more, state legislatures (like neighboring Maryland), are concluding that, when it comes to low-wage workers, employers lack a legitimate interest in preventing competition.

In short, these restrictions are becoming unreasonable.

What does the new Virginia law prohibit?

The teeth of the new law is the following prohibition: “No employer shall enter into, enforce, or threaten to enforce a covenant not to compete with any low-wage employee.”

Who are “low-wage employees”?

Low-wage employees have average weekly earnings below a certain threshold.

The threshold is a moving target, defined as “the average weekly wage of the Commonwealth as determined pursuant subsection B of Section 65.2-500.” Currently, that’s in the neighborhood of $1,100.

Besides the wage-related definition, low-wage employees also include “interns, students, apprentices, or trainees employed, with or without pay, at a trade or occupation in order to gain work or educational experience.”

The law does not address whether such interns, etc., would still qualify as low-wage employees if their average weekly earnings exceed the wage threshold. Without such guidance, employers may choose to err on the side of caution and avoid burdening such intern-like workers with a non-compete.

In addition, low-wage employees also include independent contractors who are paid at an hourly rate less than the median hourly wage during the prior year for all occupations in the Commonwealth, as reported by the U.S. Department of Labor’s Bureau of Labor Statistics.  So, another moving wage target, last reported as $20.30 per hour.

Low-wage employees do not include employees “whose earnings are derived, in whole or in predominant part, from sales commissions, incentives, or bonuses paid to the employee by the employer.” It is unclear whether “predominant part” should be viewed as a simple majority, or some other percentage of earnings.

What is a “covenant not to compete”?

The new law bans a covenant or agreement that “restrains, prohibits, or otherwise restricts an individual’s ability, following the termination of the individual’s employment, to compete with his former employer.”

That prohibited covenant can be a stand-alone agreement or (as is often the case) a provision that is part of a larger employment contract.

In other words, employers can still ban their departing employees from affirmatively soliciting customers or clients.

Even with this non-solicit carve-out, though, the new law is somewhat remarkable in that it appears to allow low-wage workers to skirt precisely the type of non-compete that many courts have found reasonable: a prohibition on servicing the employer’s existing customers and clients.

What happens if an employer violates the new law?

Low-wage employees are authorized to file a civil action against “any former employer or other person that attempts to enforce a covenant not to compete against such employee in violation of this section.”

Some guidance on this ambiguity may be gleaned from the two-year statute of limitations. That limitations period does not begin to run until the latter of several triggers: (i) the covenant is signed, (ii) the employee learns of the covenant, (iii) the employment relationship is terminated, or (iv) the employer takes any step to enforce the covenant.

The existence of these multiple triggers may imply that a suit against the employer does not require an attempt to enforce – because such a prerequisite to suit would render the earlier triggers (i.e., other than “any step to enforce the covenant”) largely meaningless.

If a violation is found, a court may void an unlawful covenant, as well as “order all appropriate relief,” including enjoining enforcement of the covenant, ordering payment of liquidated damages (which are not defined in the new law), and awarding lost compensation, damages, and reasonable attorney fees and costs. The statute appears to make recovery of certain costs and fees mandatory, stating that a plaintiff who establishes a violation “shall be” entitled to recover reasonable costs, including for expert witnesses and attorney fees.

The new law also contains an anti-retaliation provision, prohibiting employers from discharging, threatening, discriminating or retaliating against a low-wage employee for bringing a civil action.

In addition to the potential liability from a private suit, the Commissioner can impose a substantial civil penalty of $10,000 for each violation.

Do employers need to notify their workers about this new law?

Yes. Virginia employers must post a copy of the new law, or a summary approved by the Virginia Department of Labor and Industry, wherever other required employee notices are posted.

Failure to post will lead to an initial warning, then a penalty up to $250, then subsequent penalties up to $1,000.

Does the prohibition apply to non-disclosure agreements?

No. The new law specifically does not limit the use of nondisclosure agreements that prohibit “the taking, misappropriating, threating [sic] to misappropriate, or sharing of certain information, including trade secrets . . . and proprietary or confidential information.”

Where can I see the new law?