6 Keys to Separation and Release Agreements 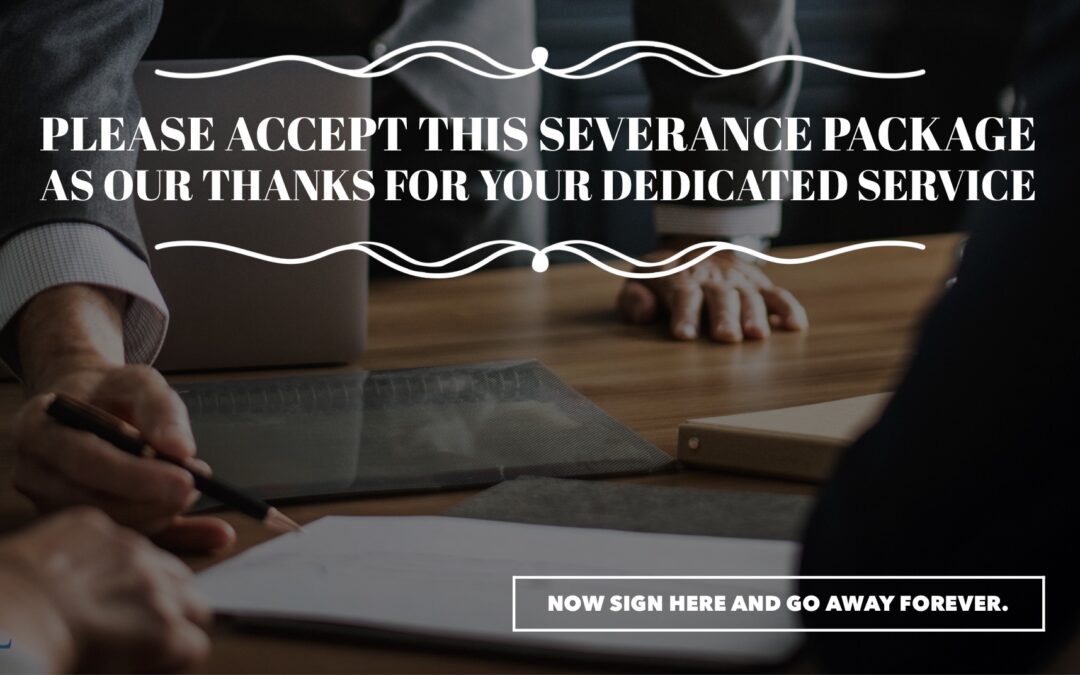 A separation and release agreement is a contract between a company and a departing worker, usually an employee.

A properly-drafted separation and release agreement can greatly benefit the company. It can minimize the threat of litigation, guard against the loss of clients or staff, and protect good-will and reputation.

The agreement can also provide significant value to the employee. The employer may offer a severance payment, continued insurance coverage, and other benefits, such as outplacement services or positive references.

But both parties need to understand these 6 critical keys to separation and release agreements:

1.  Usually, mostly, it is a release for money.

Separation and release agreements can contain all sorts of terms – from complex compensation schemes to elaborate restrictive covenants to ongoing cooperation arrangements.

But at their core, most agreements focus on one fundamental trade: a severance payment by the employer in exchange for a waiver and release of claims by the employee.

Ideally, employers would like every departing worker to have positive feelings about their time at the company, and spread good will and cheer to all who listen. Of course, that’s not always the case.

So, at a minimum, employers want to avoid litigation, arbitration, and other formal proceedings for wrongful termination, discrimination, retaliation, wage theft, and a host of similar allegations regarding workplace rights. Such proceedings can be costly, damage a company’s reputation, and create a substantial disruption to business.

To avoid that cost and disruption, employers typically offer a monetary payment in exchange for their employees’ waiver and release of such claims.

Because this exchange is so vital to most separation and release agreements:

Employers typically offer separation and release agreements primarily, if not exclusively, to receive a waiver and release of claims from the departing worker. The release typically covers claims arising out of anything that occurred on or before the signing of the separation and release agreement. The released claims are usually defined broadly, citing every type of claim or liability arising from any conduct that occurred up to the moment of signing.

However, certain rights cannot be waived, or must be waived with the appropriate language, limits, or procedure. Federal, state, and local law may prohibit any waiver that interferes with certain government missions. For example, human rights agencies, such as the federal Equal Employment Opportunity Commission (EEOC), protect an employee’s right to charge an employer with discrimination, retaliation or other unlawful conduct. Releases may (and should) carve out such rights. That said, employers may ask the employee to waive any ability to recover money resulting from such charges.

Other rights must be waived only pursuant to certain required language set forth in federal, state, or local statutes. For example, federal law prohibits an employee from waiving any right or claim under the Older Workers Benefit Protection Act (OWBPA), which is part of the Age Discrimination in Employment Act (ADEA), “unless the waiver is knowing and voluntary.” A knowing and voluntary waiver under the OWBPA must, in addition to other requirements, specifically refer to rights or claims arising under the OWBPA, not waive rights or claims that arise after the release execution date, advise employees of their right to consult with an attorney, give the employee at least 21 days to consider the agreement, and allow a period of at least 7 days to revoke the agreement. Waivers connected with “an exit incentive or other employment termination program” must also provide at least 45 days to consider the agreement and supply information regarding the other employees covered by the program (such as job titles, ages, and eligibility factors for the program). The required details are contained in 29 U.S.C. § 626(f)(1).

3.  Employees, understand how to value the severance payment.

There is no magic formula that every employer uses to calculate severance payments. Many employers base the severance offer on the length of the employee’s tenure with the company – such as 2 weeks of severance for every year of service.

However, the amount of severance may also be tied to how the employer values the employee’s release. In short, if the departing employee has strong workplace claims against the employer, that may dramatically increase the severance payment that the employer is willing to offer in exchange for a waiver and release of such claims.

An employee with viable claims and an expressed willingness to pursue such claims in arbitration or litigation may have greater leverage to negotiate a higher severance payment. That leverage is often dependent on assessing several questions, some straightforward and others more nuanced. Those questions may include:

Both parties often turn to the advice of an employment attorney in assessing potential claims, risks, and rewards – including the cost of pursuing or defending such claims, and the disruption to their respective business or career.

4.  Negotiate before the honeymoon, not after the divorce.

The best time to negotiate the severance associated with a separation agreement is often when an employee is agreeing to join a company rather than when the employee decides, or is forced, to leave.

During the hiring process, employers focus on the value that an employee can bring to the business. Companies frequently use the promise of a severance package to recruit top talent and incentivize performance.

In addition, employees typically want to impress prospective employers and avoid overly aggressive negotiation tactics. After all, the employee may be working with the company for years to come.

By contrast, negative feelings often surround the end of an employee’s tenure. A company may feel betrayed by an employee announcing a sudden departure. An employee may feel angry or mishandled by a surprise termination. The negotiation of a separation and release agreement under such circumstances can be contentious, emotional, and less productive.

While it may seem counterintuitive to talk about divorce during the honeymoon, it is actually routine. An important part of any contract negotiation – especially an employment agreement – is determining how the parties will act when they part ways.

You must understand your rights and obligations before preparing or signing a separation and release agreement. You need to know what you are getting and what you are giving up.

Review the initial offer letter and employment agreement, as well as any stand-alone agreement, which may include severance, incentive, health, or retirement plans as well as addendums, amendments, handbooks, and workplace policies. Pre-existing agreement may also result from more informal exchanges, such as emails or even oral promises.

An existing agreement or law may already require an employer to provide certain payments, paid leave, continued insurance coverage, or other benefits.

Similarly, an employee may have already signed a non-compete, non-solicit, non-disparagement, non-disclosure, or other restriction as part of a stand-alone agreement or offer letter.

The rights under these agreements may depend on the circumstances, like why the employee is leaving. For example, an employee may be entitled to severance under an existing agreement if they are terminated “without cause” but not if they leave voluntarily or get fired “with cause.”

State law may also mandate when final paychecks must be issued, how an employer can handle “accrued but unused” paid time off (PTO), and whether an employer can withhold non-discretionary bonuses or commissions.

Know your rights before you prepare or sign a separation agreement, so you can focus on the new rights and obligations being proposed.

6.  Scrutinize and tailor any restrictive covenants.

Employers often invest significant time and resources to recruit and train staff. They spend years, even decades, building their clientele and good will. They develop proprietary and non-public information that is critical to their business.

Employers can protect these vital assets through “restrictive covenants,” including:

Critically, employers must take precautions to draft restrictive covenants that a court will enforce. Usually, that requires tailoring the restriction to the legitimate business needs of the company, and providing the employee a fair ability to earn a livelihood.

However, every state has its own test for whether restrictive covenants, especially non-competes, are enforceable. Moreover, some state legislatures are implementing laws that prohibit certain non-compete restrictions on low wage workers. (Read about What Virginia Employers Need to Know About the New Non-Compete Law.)

Employees, in turn, must closely scrutinize any restrictive covenants. Such provisions can dramatically limit their future behavior and have a significant impact on their career. Employees must pay particular attention to non-competes that attempt to bar them from working in entire industries or providing any services for competing companies.

Understanding these 6 keys to separation and release agreements will help companies obtain critical protections for their business, and allow departing employees to enjoy important monetary and other benefits while protecting their career.

Learn even more about separation and release agreements.